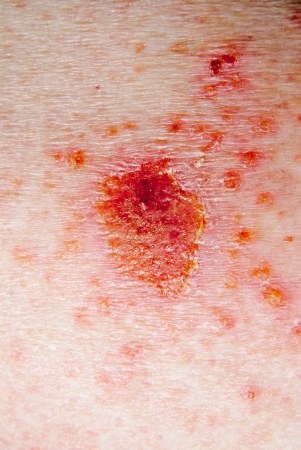 The Most Common Skin Cancer
Basal cell carcinoma is the most common form of skin cancer, affecting 800,000 Americans each year. In fact, it is the most common of all cancers. One out of every three new cancers is a skin cancer, and the vast majority are basal cell carcinomas, often referred to by the abbreviation, BCC. These cancers arise in the basal cells, which are at the bottom of the epidermis (outer skin layer). Until recently, those most often affected were older people, particularly men who had worked outdoors. Although the number of new cases has increased sharply each year in the last few decades, the average age of onset of the disease has steadily decreased. More women are getting BCCs than in the past; nonetheless, men still outnumber them greatly.

The Major Cause
Chronic exposure to sunlight is the cause of almost all basal cell carcinomas, which occur most frequently on exposed parts of the body – the face, ears, neck, scalp, shoulders, and back. Rarely, however, tumors develop on non-exposed areas. In a few cases, contact with arsenic, exposure to radiation, and complications of burns, scars, vaccinations, or even tattoos are contributing factors.

Who gets it?
Anyone with a history of frequent sun exposure can develop basal cell carcinoma, often referred to as BCC. But people who have fair skin, light hair, and blue, green, or gray eyes are at highest risk. Those whose occupations require long hours outdoors or who spend extensive leisure time in the sun are in particular jeopardy. Dark-skinned individuals are far less likely than fair-skinned to develop skin cancer. More than two-thirds of the skin cancers that they do develop, however, are squamous cell carcinomas, usually arising on the sites of preexisting inflammatory skin conditions or burn injuries.