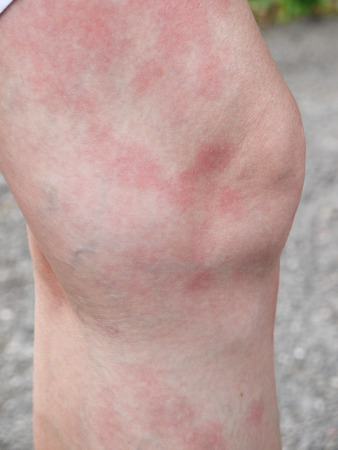 Heat rash: Small bumps that are either fluid-filled or look like blisters can be a result of heat rash, especially if you’ve been out in the heat, been sweating, and/or wearing tight clothing.

Intertrigo: If you have a bright red rash in moist areas where your skin rubs together (think under your arms, behind your knees, or in other skin folds), you may have intertrigo.

Medicine rash: If a rash suddenly appears after you’ve just started on a new antibiotic, anti-seizure medication or diuretic, you might have a medicine-related rash. This rash starts out as small red splotches that quickly spread to cover large portions of your skin.

Ringworm: Contrary to its name, there are no worms involved here. Instead, this rash is caused by a fungal infection. It looks like an expanding ring, which grows outward.

Swimmer’s itch: If you’ve been swimming in not-so-clean water, you may have swimmer’s itch, which is a mild rash of itchy red bumps caused by parasites.