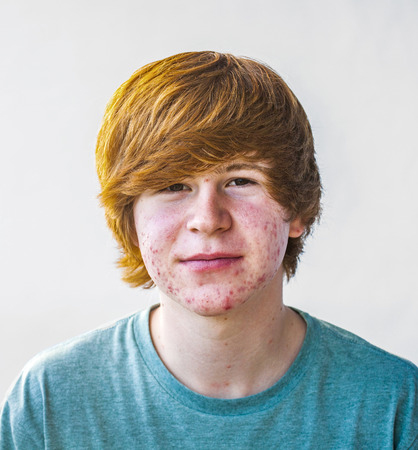 What is Acne?
Acne is a treatable common medical condition that generally affects people in their adolescence, but people of any age can experience acne. The term acne is used to describe red pimples, blackheads, large nodules or whiteheads. Acne can appear on the shoulders, chest, back, arms, and buttocks; however, they most commonly affect a person’s face.

Acne affects boys more commonly than girls and the severity can range from mild to severe. Untreated acne lasts for about 4 to 5 years, however, in some people; it can last for more than 10 years, if not treated properly.

What Causes Acne?
Acne does not result from a single factor, rather a variety of factors are responsible. Acne occurs when oil glands attached to the hair follicles are stimulated due to hormonal changes or at the time of puberty. Sebum secreted from the sebaceous gland is a natural substance that protects and lubricates the skin. Acne is associated with increased oil production, which leads to pre-disposing of mature cells into the follicle pore. When there is no inflammation, the plugging of hair follicles leads to open comedones (blackhead) and closed comedones (whiteheads). Open comedones are black in color, not because of dirt deposition rather the color is due to chemical changes going in the cell.

If you have been struggling with the problem of acne and want to achieve flawless glowing skin, choose acne treatments performed by Dr. Kling.

Will the Acne go away?
In a majority of cases, it has been seen that acne goes away on its own at the end of puberty; however, even after crossing the age, a lot of people struggle to get rid of acne. Acne can be successfully treated; it’s just the case of finding the right doctor and treatment.

What Makes Acne Worse?
Acne is not seen as a serious problem as they tend to subside in the late teens. However, for patients who continue to experience acne throughout their adulthood, it is almost impossible to predict when they will get rid of it.

Greasy makeup is often seen as a culprit behind acne breakout. While a majority of oil-free makeup products do not affect acne, greasy makeup items are known to cause a breakout.
In women, acne can flare up before menstruations because of hormonal imbalance.
There are a variety of medications that can further worsen the acne. However, you should not stop the prescribed medication, rather talk it out with your doctor and find a solution.
Previously, it was thought that diet high in milk products and sugar worsen the acne, but researchers have failed to find evidence to support their claim.
Acne also develops under a tight piece of clothing due to increased sweating or friction.

What About Food and Acne?
Teenagers are often told not to indulge in greasy fried food as it causes acne; however, this is not true. While these foods are not good for your overall health, they don’t cause acne. High carbohydrate diet, pure chocolate, and milk have shown some signs of aggravating acne, but it has not been proved yet!

Things to Avoid During Acne
As opposed to popular myth, dirt does not cause acne, rather rubbing and scrubbing of the face can eventually aggravate acne. Do not wash your face vigorously as it may cause inflammation. Avoid pressure from the helmet on the affected areas as it can have a harmful effect. Squeezing of acne lesions can lead to irritation, prolongation, and inflammation.

How to Treat Acne?
The most useful and easiest lifestyle change a person can make is to avoid picking, popping or playing with acne. Playing around with acne will make the bump stay bumpier for long. Apart from this lifestyle change, you can choose to take up different medications specifically meant for the treatment of acne.

Antibiotics: Available as pills and in topical form, a majority of antibiotics can be used to treat acne. Antibiotics medicines can be taken for several months, under medical supervision, to control the acne and prevent it from coming back.

Isotretinoin: This is the only medicine known to regulate sebum production. As it controls oil, many patients may experience dry lips and skin, during treatment.

Other Medicines: A large number of over-the-counter medicines are available that helps treat acne. These include Spironolactone pills, birth controlling pills and topical Azelex cream.

Will Acne Return After Treatment?
Once the acne spots have been cleared, there are very few chances that acne will flare up. Doctors usually advise the patients to carry on a maintenance treatment to avoid acne from flaring up again. Benzoyl peroxide is more often used for the maintenance treatment as long-term use of an antibiotic can lead to resistance.