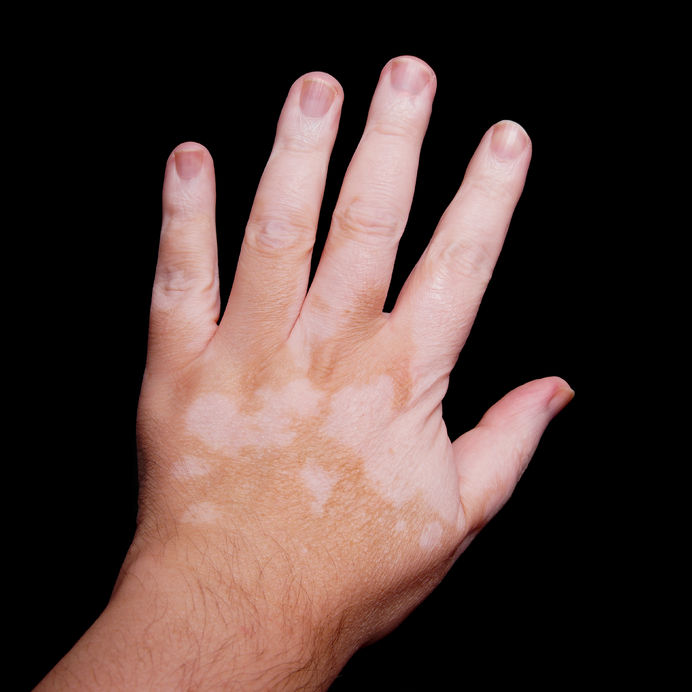 What Is Vitiligo?
Vitiligo (vit-ill-EYE-go) is a disorder in which white patches of skin appear on different parts of the body. This happens because the cells that make pigment (color) in the skin are destroyed. These cells are called melanocytes (ma-LAN-o-sites). Vitiligo can also affect the mucous membranes (such as the tissue inside the mouth and nose) and the eye.

What Causes Vitiligo?
The cause is not known. Vitiligo may be an autoimmune disease. These diseases happen when your immune system mistakenly attacks some part of your own body. In vitiligo, the immune system may destroy the melanocytes in the skin. It is also possible that one or more genes may make a person more likely to get the disorder.

Who Is Affected by Vitiligo?
Many people develop it in their twenties, but it can occur at any age. The disorder affects all races and both sexes equally, however, it is more noticeable in people with dark skin.

Vitiligo may also run in families. Children whose parents have the disorder are more likely to develop vitiligo. However, most children will not get vitiligo even if a parent has it.

What Are the Symptoms of Vitiligo?
White patches on the skin are the main sign of vitiligo. These patches are more common in areas where the skin is exposed to the sun. The patches may be on the hands, feet, arms, face, and lips. Other common areas for white patches are:

How Is Vitiligo Diagnosed?
The doctor will use a family and medical history, physical exam, and tests to diagnose vitiligo. The doctor may ask questions such as:

The doctor will do a physical exam to rule out other medical problems.
Tests might include:

How Is Vitiligo Treated?
Treatment may help make the skin look more even. The choice of treatment depends on:

Current treatment options for vitiligo include medical, surgical, and other treatments. Most treatments are aimed at restoring color to the white patches of skin.

What Can People Do to Cope With Vitiligo?
When you have vitiligo, you may be upset or depressed about the change in your appearance. There are several things you can do to cope with the disorder:

What Research Is Being Done on Vitiligo?
Scientists have gained a better understanding of vitiligo in recent years, especially through gene research. Current research includes studies to investigate: